RUSSIA vs. UKRAINE: A Possible Diplomatic Solution. Part 3 of 3 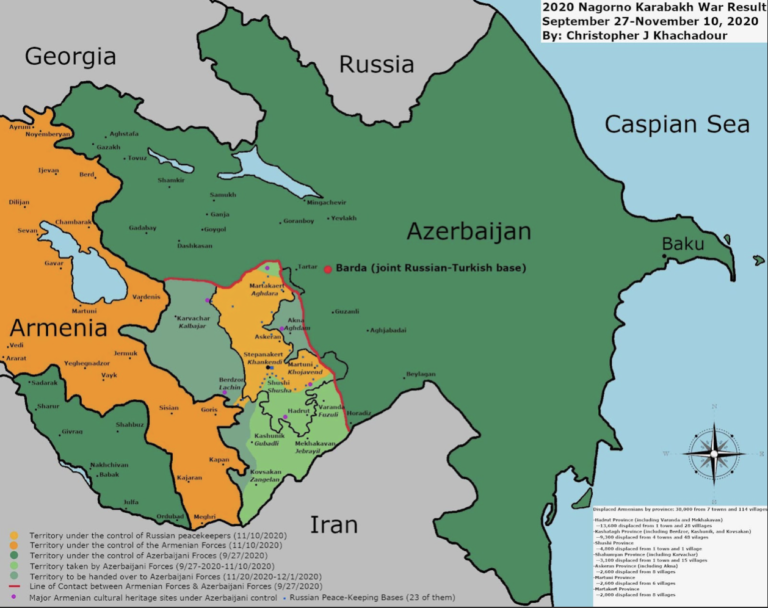 THE POTENTIAL KEY TO A DIPLOMATIC SOLUTION?

While I outlined in Parts I and II why the United States and our Western allies must support Ukraine to the maximum extent possible, it is in all our interests to find a satisfactory end to the bloodshed sooner rather than later, while parts of Ukraine are still intact, and while Russia might still be persuaded to accept a compromise.  Right now, the Russians are angry, isolated, and tied more deeply to China, Iran, Syria, North Korea, and other autocratic outlaws.  Although the Russian ruble is currently at seven-year high against the dollar, the wholesale withdrawal of Western companies and foreign investment will be highly damaging to the Russian economy in the long term.

GEN Colin Powell had several wise maxims.  One was to never go into a war without a clearly defined exit strategy.  A corollary to that would be: never go to war without a clear definition of what constitutes victory, as well as an acceptable fallback if it turns out that that definition of victory turns out to be unachievable.  We don’t know what Putin’s “acceptable fallback” might be, but I believe it would be better for Ukraine to spell out for Russia its own version of an acceptable compromise and get the Russians to work from its draft text in an all-encompassing peace treaty.  President Zelenskyy has already indicated some willingness to discuss territorial claims, but not Ukraine’s sovereignty and political and economic independence.

At this point, all of us need to ask ourselves: Ukraine’s and who else’s armies would be able to wrest Crimea from Russia’s control as of now?  Understanding that Russia’s seizure of Crimea in 2014 was illegal and illegitimate under numerous international laws and treaties, it nevertheless fully controls and administers Crimea now.  If Ukraine were to accept that fait accompli, what could it get in exchange?  A possible answer occurred to me, drawing lessons from the armed conflict between Azerbaijan and Armenia over a majority ethnic Armenian-populated region within Azerbaijan’s borders called Nagorno-Karabakh.  The fighting began in 1988 – three years before the Soviet Union collapsed – as Armenia tried to claim Nagorno-Karabakh, an autonomous region within Azerbaijan, as either a formal part of Armenia, or as an independent state.  Armenia’s historical ties to the area go back several centuries, even through a period when Nagorno-Karabakh was part of a semi-independent Khanate under Persian (Iranian) control.  The current conflict intensified in the early 1990s, with the Armenian and separatist forces often expanding their hold over buffer territories surrounding the disputed region.  Over the years, the battle lines more or less solidified for several years at a time, until a brief “hot war” of intense fighting would break out, thus altering the “Line of Control” and each side’s control over various pieces of territory.

In 1994 the Vienna-based Organization for Security and Cooperation in Europe (OSCE) facilitated the establishment of the “Minsk Group” to lead negotiations towards a final settlement of the conflict.  The co-chair countries are the United States, the Russian Federation, and France.

Although I was never directly involved in these negotiations, I have followed the diplomatic reporting on them at various times in my career since the Minsk Group was formed in 1994.  It seems to me that for about the past 20 years, a relatively simple solution was available to both countries along the principles outlined above.  At certain moments of opportunity over the past three decades the Minsk Group brought together the long-lasting President of Azerbaijan, Ilham Aliev, with several duly elected Armenian Prime Ministers to attempt to hammer out an enduring solution.  While resolution seemed within their grasp at various moments with the OSCE-led negotiators, in the end, neither side could close the deal.  I suspect I know one main reason for that.

In another instance of an even longer-standing territorial dispute but with somewhat similar political dynamics, the world witnessed the negotiating failure at the July 2000 Camp David Summit when President Clinton hosted extended talks between Israeli PM Ehud Barak and Palestinian Authority Chairman Yasser Arafat.  Their goal was to try to resolve the major sticking points in order to achieve an actual peace treaty between the two sides.  These talks were a continuation of the disjointed negotiations that had begun with the 1993 Oslo Accords that Norwegian diplomats had facilitated at the start of Bill Clinton’s U.S. Presidency.  Through this effort, in 1993 Israel recognized the Palestinian Liberation Organization (PLO) as the legitimate representative of the Palestinian people, and the PLO formally recognized the state of Israel, and then they laid out some interim transference of governance steps to the Palestinians that eventually would lead to a permanent two-state solution.  By the year 2000, neither side was satisfied with what had thus far been achieved under the Oslo Process, and Clinton persuaded them tackle together the really hard permanent status issues, such as jurisdiction over Jerusalem and its holy sites, the Palestinian refugees’ “right of return,” and the future status of Jewish settlements in the West Bank, among others.

Each of the three negotiating partners had their versions afterwards explaining why the talks had failed, with lots of finger-pointing.  One common thread heard in the U.S. and Israeli stories detailing why a permanent solution had ended up beyond their reach was that Yasser Arafat had been willing to accept and pocket Israeli concessions, but he had offered few of his own.  In my (granted, not fully informed) view, the main reason these talks achieved little in the end was because Arafat in particular had not prepared the Palestinian people to accept a compromise.  While making somewhat promising overtures to the Israelis in private, it seems he and other Palestinian leaders had made very few efforts to inform their populace that they would not be able to achieve their maximalist positions, such as maintaining full control over the Temple Mount and all of East Jerusalem, or of obtaining a full right of return for all Palestinian refugees, at that point numbering some four million people, spread across Lebanon, Jordan, and elsewhere, to return to and own their ancestral plots of land, wherever they might be located, across all Israeli and Palestinian territories.

In other words, at home, Arafat and the PLO had led their people to expect “zero-sum negotiations” through which, for the Palestinian side to win, the Israeli side had to concede on all issues.  Therefore, if Arafat had accepted some or all of the Camp David deal on the table in July 2000, he could not have sold it at home, thus jeopardizing his grip on power.  Striking this maximalist public position at home while apparently showing flexibility in confidential multilateral negotiations is not a recipe for success.  Diplomatic negotiations by definition require compromise and concessions by both sides.

I witnessed this same phenomenon in Iraqi politics in 2004 and afterwards, after full sovereignty was restored to the Iraqi nation on June 28, 2004.  Too many of the new Iraqi Sunni, Shi’ite, and Kurdish political leaders engaged in this same zero-sum politics game, under which they only considered themselves having “won” on a given issue if the other two sides caved completely.  This non-productive, all-or-nothing attitude inevitably leads to further bloodshed.

Similarly, this lack of wise leadership has been evident in both Azerbaijan and Armenia over the past three decades.  A viable solution has been within their grasp for much of that time – if they were willing to prepare their respective populations in advance to accept compromise in order to achieve an equitable, although not fully satisfactory, solution.  There’s an old diplomatic maxim stating that successful negotiations have been achieved when all sides leave the table equally unhappy, meaning that no side was able to get all that it wanted.

To my mind, the acceptable but not-fully-satisfactory solution for Nagorno-Karabakh to each side would be for Azerbaijan to concede that Nagorno-Karabakh is either an independent state, or that it belongs to Armenia, and to grant a permanent land bridge, in other words, a simple, very narrow, road, rail, and air corridor from Armenia to Nagorno-Karabakh proper.  In return, Armenia must return all of the surrounding “buffer” territory to Azerbaijan, and both sides are responsible for demining and for clearing unexploded ordinance (UXO) from any lands where they have laid such mines, or expended UXO.  The two sides are welcome to work jointly in this endeavor as a confidence-building measure. Further, both sides must facilitate the return of the displaced and refugees to their former homes, irrespective of on whose territory those former homes are now located.  The two nations could form a property dispute settlement board to jointly resolve the trickier real estate claims.  In addition, if the two sides want to establish a permanent international peacekeeping presence to ensure the fulfillment of all obligations in a duly enacted peace treaty, they are welcome to request such a peacekeeping force, and to designate under which international organization’s auspices they want that force to operate.

What would my similar solution entail for Ukraine and Russia at this time?  Given Russia’s several centuries of emotional history with Crimea, it would mean that Ukraine would have to formally cede Crimea back to the Russian Federation, and to give the Russians a narrow land (road and rail) corridor through the Donbas and along the southern coastline leading to Crimea.  In exchange, Russia would renounce all claims to, and fully withdraw from, all other Ukrainian territory, including the Donbas region and any other territory it currently occupies.  Russia will cease to support the separatists in the Donbas region, and they must be placed under full Ukrainian control.  Ukraine’s legal claims against the separatists could be dealt with separately as an internal matter, or as part of the peace negotiations with Russia, as decided by those parties.

All Russian vehicles or trains transiting the land corridor through sovereign Ukrainian territory to Crimea will be subject to search for illicit weapons or other prohibited materials, either by Ukrainian forces, or by an international peacekeeping force, as shall be determined by the two parties in the negotiations of the formal peace treaty under international auspices.  With Ukraine granting this territorial compromise, the Russian Federation must obligate itself to full recognition of Ukraine’s sovereignty, independence, and territorial integrity, as modified by this legally binding peace treaty.  The Russian Federation must also pay a set amount of funding for reparations for the structural damage it has caused across Ukrainian territory, as mutually determined by the two parties.  It is my prayer that such a compromise on the part of both countries would be sustainable and effective in keeping the peace in Europe.

Meanwhile, please continue to pray for the nations of Ukraine and Russia, and that God will bring His peace to end this war.  Also, keep giving to the charities you find worthy of your contributions who are helping those in need in Ukraine.  Here are a few links to some of mine:

Bless the “Least of These” | Donate | International Fellowship of Christians and Jews (ifcj.org)