RUSSIA vs. UKRAINE: A Possible Diplomatic Solution. Part 2 of 3 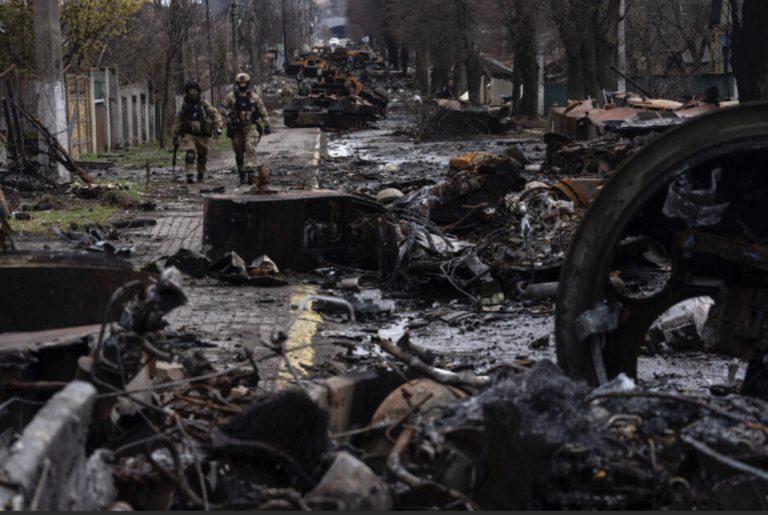 WHAT IS PUTIN’S PURPOSE IN DESTROYING UKRAINE?

Newsmax reported on June 15 that Russian President Putin may be suffering from some type of blood cancer, at least according to unnamed senior Russian MOD sources.  The Newsmax video showed the Russian President giving a speech in the Kremlin with his arms occasionally trembling and his knees beginning to buckle at times.  He reportedly had some kind of surgical procedure for cancer a couple of months ago.  One wonders, if Putin knows he is dying, why is it his goal to completely destroy most Russians’ closest relatives and leave Ukrainian territory nothing but scorched earth?  Has he decided to kill, or make permanent refugees of, as many Ukrainians as possible because, if he can’t conquer Ukraine, he wants to make sure no one else can possess the land either?  Most especially NATO and the European Union, much less the Ukrainian people themselves?

Having served in both Iraq and Afghanistan, I have learned a lot about, and even taught at the U.S. Army War College, how to successfully conduct post-war stabilization operations in order to “win the peace.”  Putin’s demonic utter destruction of thousands of houses, farms, and apartment buildings, whole cities, and civilian infrastructure demonstrates that he has abandoned the goal of occupying Ukraine.  Instead, he seems determined to ensure there’s nothing left to occupy.

In his nationalist fantasies, Putin claimed in June that he is some sort of heir of Peter the Great.  Yet, the consequences of Putin’s hubris and barbaric warfighting against Ukraine may well be cataclysmic for Russia itself, the country he claims to love.  According to CNN on June 14, “Russia has suffered losses of as much as a third of its ground force, and U.S. intelligence officials have said publicly that Russia will struggle to make any serious gains without a full mobilization, a politically dangerous move that Putin has so far been unwilling to make.”

In fact, the number of body bags of dead young soldiers going back to Russia in the past four months from the country next door has been greater than from fighting for nearly 10 years in Afghanistan (1979-1988).  This number of dead going home to their mothers also is not politically sustainable.  The soldiers’ mothers civic groups are among the powerful voices in Russian society.

Western sanctions on over 1,000 Russian industries, banks, oligarchs, and government officials have been severe and will hopefully continue to get much worse.  And Moscow’s monetary costs of fighting the war in Ukraine are considerable.  Nevertheless, Western import bans on Russian oil and gas have served to pump up their prices quite nicely for Putin as his quasi-government-run enterprises now sell these global commodities to China, India, and others instead, at inflated prices.  Western news outlets state that Russia is earning a $1 billion per day for its oil and gas, so the economic effects of Western sanctions have been uneven, to say the least.  While entire Ukrainian cities now lie in ruins, many of the Western sanctions on Russian leaders are mere inconveniences.  If they can’t go visit their ill-gotten gains in the banks in Geneva, London or Vienna, they will simply take vacations in Turkey or Southeast Asia.

Meanwhile, however, Putin’s apparent intentions to keep Ukraine forever out of NATO and the EU, and to also weaken both Western institutions while he was at it, have backfired spectacularly.  NATO hasn’t been this united in the past 20+ years.  Further, Sweden and Finland have now applied to join the Alliance.

In addition, on June 23rd the 27 EU states voted unanimously to grant EU candidate status to Ukraine and Moldova so they can begin the formal accession process to join the Union.

As for providing the weapons Ukraine needs to successfully defend itself, according to Senator Rand Paul on June 18, 2022, the U.S. has appropriated $54 billion (mostly in weapons) within just the past two months for Ukraine.  Senator Paul is (correctly) worried about accountability.  Nevertheless, our, and our NATO allies’ high-tech weapons systems are essential to ensuring Ukraine’s survival, and to ensuring that Russia goes no further.

On June 24, the UK online “Express” site reported that, “Germany has finally approved the supply of heavy weapons to Ukraine with supply of seven Panzerhaubitze 2000 Howitzer cannons, with France and The Netherlands also providing variants of the Howitzer to Ukraine, giving Kyiv a geographical advantage in defending key cities in the country.”  In addition, the British Government has shipped highly sophisticated drones to Ukraine.

Nevertheless, according to Ukrainian President Zelenskyy in mid-June, only 10% of the promised advanced Western weaponry had actually arrived in Ukraine.  The three main foot-draggers in sending weapons are reportedly the United States, Germany, and France.  To prove in any way decisive in helping Zelenskyy and Ukraine to defeat, or even fight to a tie with, Putin’s Russia, Western governments must fulfill their promises of advanced weaponry and training on those systems as quickly as is humanly possible.  The good news is that many of those weapon systems have begun to flow in within the past week, and they are already making a difference as they extend Ukrainian forces’ capacity and reach to target Russian bases and convoys.

According to the British “Express” website on June 22, in the US’s most-recently pledged $1billion (£800million) weapons package, Harpoon anti-ship missiles are included, as well as Howitzer cannons.  U.S. officials have also provided longer-range HIMARS (High-Mobility Artillery Rocket System) and MRLS (Multi-Rocket Launch System) weapons to Ukraine, which are finally arriving in-country at this moment, in spite of initial fears Ukraine would use the equipment to target locations within Russia.  Ukraine had to guarantee the weapons would only be used against Russian forces inside Ukrainian territory.  I find these artificial restrictions by the Biden Administration quite unfortunate.  Given that Ukraine is in an all-out war for its own survival, it makes little sense from Kyiv’s perspective to fight with one hand tied behind one’s back.  It reminds me too vividly of the restrictions on International Security Assistance Forces in Afghanistan who could not pursue Al Qaeda and Taliban fighters as they fled over the porous border into Pakistan.

The reason the Biden Administration wants these restrictions on Ukraine’s warfighting actions, however, is as a fig leaf to protect itself, because basically, this war has turned into a proxy war between Russia and NATO, being carried out on Ukrainian soil, shedding Ukrainian blood, and leaving Ukraine’s territory in ruins.

It’s eerily similar in terms of human suffering to the proxy war in Yemen being waged since 2014 by Iranian-back Houthi militias against Yemen’s previous government forces that Saudi Arabia continues to back, and more realistically, to fight in place of.  But it is the Yemenis themselves who are starving and dying, suffering probably more than any nation on earth, while the intractable religious conflict between Iran and Saudi Arabia manifests itself at Yemen’s expense.

Back in Europe, since Putin chose to heighten the war against Ukraine with a full-on invasion, instead of hiding behind Ukrainian separatists and “little green men” as it has done for the past eight years, my view is that NATO and the EU have no other choice but to back Ukraine “for as long as it takes,” as NATO Secretary General Stoltenberg stated this week.  Putin’s massive disruption of the post-WWII rules-based world order cannot be allowed to stand.  If the Russians get away with this lawless land-grab, watch, for starters, what China will do to Taiwan, and how much more of the South China Sea it will seize.  Tyrants everywhere will take advantage of any lack of Western resolve.  In addition, despite its flaws as a nascent democracy, Ukraine’s shared values of wanting its own political independence, territorial integrity, self-determination, and freedom and liberty for its people, are also worthy of Western support.

Fortunately, unlike the situation in Yemen, in the case of Ukraine, there may be a possible resolution to the warfare and bloodshed, using the experience gained from another part of the Former Soviet Union, namely Nagorno-Karabakh.  Stay tuned for Part III!