Do You Really Need ANOTHER Reason to Drop Facebook?

If censorship, bias, and arrogance are not enough, I discovered yet another reason why Conservatives should eschew Facebook.

In a December 13 post (click here for the full article), the Gateway Pundit reported that attorney David Becker announced the formation of the Wisconsin Election Official Legal Defense Network (EOLDN).  Now this is nothing new.  The Left routinely creates organizations for the defense of suspect activity.  But digging a bit deeper, a more disturbing fact is revealed.  It appears that Mr. Becker is also the founder of the Center for Election Innovation and Research (CEIR).  This group was substantially funded by Facebook CEO Mark Zuckerberg and, along with the Center for Technology and Civic Life (CTCL) (another Zuckerberg innovation)was responsible for distributing $419million to local government election offices (click here for the full article).  Over $7million of these funds found their way into Florida during the 2020 election (click here for more details).

But perhaps what is most troubling is that this same David Becker, an ex-DOJ attorney, is founder of the Electronic Registration Information Center affectionately known as ERIC.  As recently reported in the Gateway Pundit (click here for the full article), ERIC is a system that purportedly helps local election officials to clean and maintain voters rolls, but it was proven to be an abject failure in this regard.  In fact, it appears that the system’s real purpose is to inject Democrat voters into the rolls while hardly removing any questionable voter records.

EOLDN, CTCL, CEIR and even perhaps ERIC, all have a common denominator – Mark Zuckerberg.  Free and fair elections are under siege by funding originating with Zuck.   The good news is that Patriots have a few courses of action available to remedy this situation.  Governor DeSantis’ ban on these funds (“Zuckerbucks”) last year should go a long way to reducing this unwanted intrusion in Florida elections.   But I for one would like to see full investigations into all Florida election officials who accepted funds from CTCL and CEIR.

And closer to home, the best way in my view, to mitigate Zuck’s influence in our elections is to reduce our reliance on his platform – Facebook.  I have deliberately reduced the time I spend on FB quite substantially. Also, I have recently started replying to Facebook advertisers that I do not patronize companies that advertise on the platform.   I suggest that we all start doing this to send Zuck a clear message that we have yet another reason to drop Facebook. 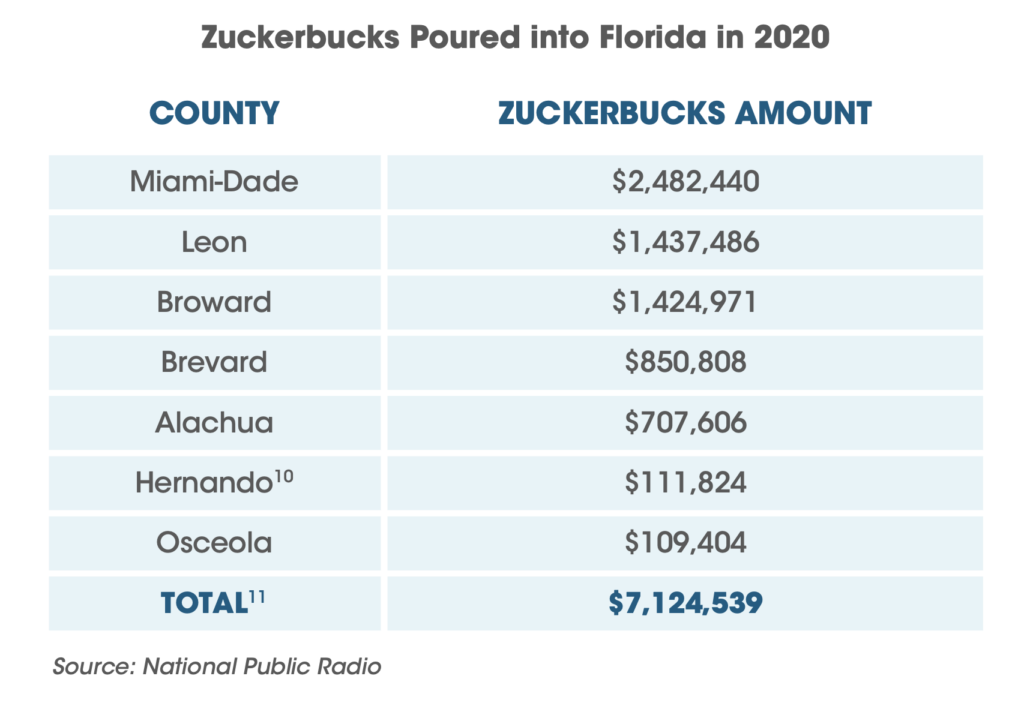