Yes Virginia, there IS voter fraud in Florida! 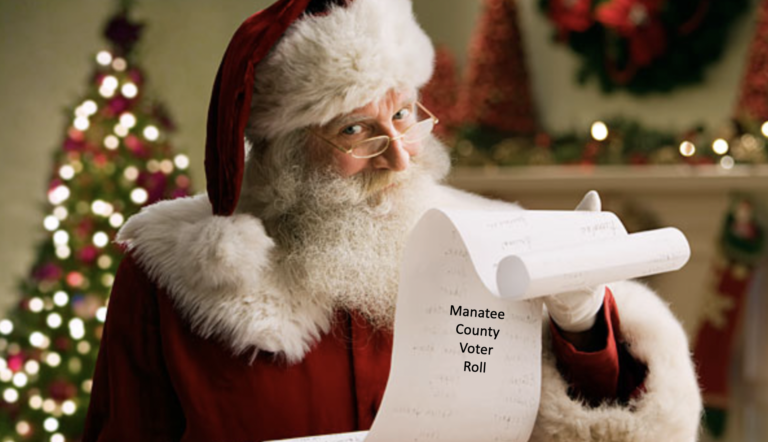 I am a procrastinator.  But I always haven’t been this way.  When I was living in New Jersey I used to have all of my Christmas lights up before Thanksgiving.  The Christmas tree was usually erected, solely through my efforts (despite having sired 3 teenage sons) before the first Saturday in December.  It was only after I had moved to the Sunshine State that I have become overcome with a sense of contented lethargy.

So it wasn’t until the day before the Manatee Patriots Christmas Party that I decided to venture out to Home Depot for some new strings of Christmas lights.  While there, I saw that there were only a half dozen boxes on display.  With Christmas less than 3 weeks away, I was amazed that modern ERP systems were responsible for the almost perfect prediction of Christmas light demand.  So I wondered; if technology could pinpoint the exact level of Christmas lights inventory in Home Depot, what can it do for Elections?

Well if recent articles are any indication, a lot of voter fraud has occurred in Florida elections of a particularly low-tech nature.  You really don’t have to look too far to find evidence of voter fraud throughout the state of Florida.  In a recent Orlando city council election, for instance, the Supervisor of Elections (SOE) disallowed a vote after it was determined that the paper ballot used was fake (it lacked the exact matching bar codes found on official ballots).  Then there was the case of the Eatonville, Florida town council race, where evidence of fraudulent votes being cast or procured actually caused the election to be decertified and declared the “losing” candidate the winner.

So you see, you can dispense with those visions of Dominion voting machines transmitting election files to the Ukraine (or was that Macedonia?) dancing in your head.  Voter fraud can and does occur here in Florida; the old fashioned way.

Now if you’ll excuse me, I have to make a run to Home Depot before all of those Christmas lights are gone.